The Story of Anathoth Jams and Pickles 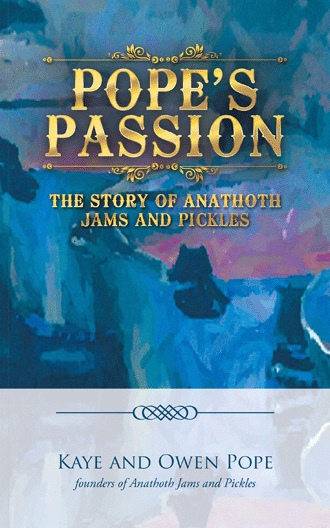 OWEN Pope was born in the small farming community of Haldane, situated at the far end of the South Island, where the Macrocarpra trees grow horizontally, as a result of the strong salt laden, westerly winds and like other farmer’s sons in the district, was sent to boarding school in the nearby city of Invercargill, for his secondary education. After leaving school he pursued many occupations, continually being influenced by the amount of money he could earn. He married, had children, and more money enticed him into the set-up team at the Tiwai Smelter but it wasn’t long before his wife’s infidelity, tested his core values and their relationship was destroyed. Custardy battles for the children, saw him deprived of contact and he was left a ‘broken’ man. He took a stress free job at Allied Concrete, batching their ready mix concrete and sometime later, met and married a school teacher, Kaye Walker who had some eighteen months before left an abusive marriage with her two young children, whom he later adopted. A relocation to Nelson, brought a new beginning and new enterprises. After purchasing a property, the blue skies and warm days in the ‘sunshine capital of New Zealand’ became the ideal holiday place for friends and family to visit, so building a house on the back of the section seemed like a good idea. Then, by working every night and every weekend for twelve months, it was completed. Owen and Kaye move happily on through the human life cycle growing their teenagers, caring for elderly parents, reflecting upon the deeper meaning of their lives and then taking on what was to prove to be the biggest challenge of them all, the purchase of an undeveloped lifestyle block of land in Upper Moutere. Their vision was to use a small patch of raspberries, already growing on the property and plant out the remaining land to be self-supporting in Christian ministry. The last two owners of the land had gone broke, but the emotional connection they felt for the land far outweighed their fear of failure, besides they were confident that they had the ability to turn the farm into a self-supporting life style! The neighbours were very welcoming but disaster struck in the first few months of moving in when a bull-dozer driver was killed while clearing the gorse from their block. Then after two years of harvesting raspberries a pitiful payment was received from the Raspberry Marketing Board, which had compulsory sale and purchase of their raspberries, resulting in a struggle for finance to increase raspberry plantings. It wasn’t until 1991 that the solution to Owen and Kaye’s situation took off in full flight. After several years of selling raspberry jam in the Nelson market and studying the likelihood of establishing a small jam business, they outfitted a commercial kitchen on the farm. Owen had studied church planting with John Wimber, a church growth consultant and so with the marketing principles he had learnt from him he was able to launch a plastic pot with a simple label and push their sales of raspberry jam into the supermarkets. He understood that you adopted something that is working, rather than adapting it into something else and began applying these same successful principles of church planting, to the jam marketing. For Owen marketing a product was not an academic exercise, where you display your knowledge and ability through packaging and websites in the hope of attracting people to your product. Owen stayed away, from the accepted practice of deceit and allowed the quality, and price of his product to be presented through the jam pot’s simple honest labelling and customer’s tasting of the product. His rational was, what you see is what you get. A pot of raspberry jam is a pot of raspberry jam! Throughout this period of survival, they were side-tracked by other start up projects, such as the Christian School Kaye was caught up in and the Department of Scientific Industrial Research trials with raspberries, and labour initiatives by successive governments. However, in spite of ongoing situations, by 1996 Owen had managed to squeeze in a trip to his much loved Anaheim Vineyard, in California, the church of his mentor, John Wimber. Then with the success that Owen and Kaye were having processing crops they grew, other farmer were keen to join the processing venture, so a new company structure was needed and Anathoth Marketing was formed. By 2003 Owen’s success was beginning to be noticed and recognized by some commercial persons, economists, bank directors and investors alike as he deservedly received all the accolade that followed and all the while, his insight and quiet confidence, kept continuing to gear up the business at each new stage of growth. By now his company was looked upon as one of New Zealand’s more highly regarded niche food production companies. He had the recipe for successful sales that made their fledgling business grow because he would never compromise his priorities of quality, service, efficiency and profitability or swap a higher one for a lower one! Small businesses are created by entrepreneurs and are the backbone of any economy. A small business can become a big business and to become a big business investment is needed and as the last chapter of this story unfolds, the experiences of sharing that growth and success with a new investment partner are divulged!

Owen Pope grew up in the small New Zealand farming community of Haldane, situated at the far end of the South Island, but he didn’t immediately throw himself into farming.

Instead, he tried a variety of jobs and married young, ignoring those who told him he was making a mistake. He had three children before divorcing and ending up in a bitter custody dispute.

Everything changed when he met a schoolteacher named Kaye, who he asked to marry him after knowing her a week. In 1987, they became the proud owners of a block of land in the Moutere, which had a small patch of raspberries.

The couple thought they could make money from a raspberry crop, but that wasn’t easy. They discovered that they could add value to their crop by making jam, and began selling their Anathoth brand of jams at a brisk pace.

Soon, other farmers joined their effort, and the couple found themselves at the top of one of New Zealand’s most successful businesses.

Join the Popes as they celebrate family values and reveal the business secrets that allowed them to build an empire built on jams, pickles, and hard work in Pope’s Passion.

Kaye and Owen Pope established their Anathoth brand of jams and pickles after purchasing a raspberry garden in Upper Moutere, Nelson, in 1987. Their raspberry and apricot orchards were ultimately sold, but they continue to make jams and pickles under the Pope label in Townsville, Australia.