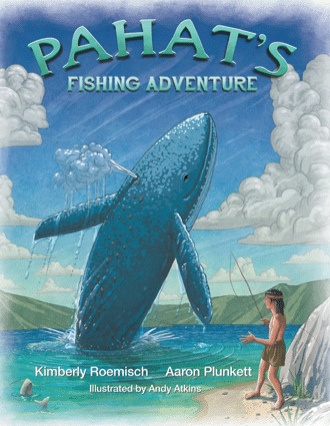 Pahat's Fishing Adventure is inspired by a series of true events.  The true events are The Story Behind the Story.  Both tales are mysterious and magical.  Readers of all ages can identify with this vision of universal appeal.  The vibrant color illustrations capture the imagination and set the stage for a surreal experience where reality borders the unbelievable.

Pahat's Fishing Adventure is a touching coming of age story about a young native boy who wishes to go fishing out on the ocean with his father; but his father believes he is “much too young and it is much too dangerous.”  With the help of a cantankerous catfish and a ghostly whale, magic happens and Pahat gets his wish.

This story explores and demonstrates ways in which animals resonate with humans and honors the beliefs of tribal and indigenous people.  Cultural and symbolic meanings merge in this mythological tale as if stretching back in time when Chumash Heroes soared through skies and swam in the oceans, lived in crystal houses at the bottom of the sea, when divine beings and creatures roamed the earth, and Hutash, Mother Goddess ruled supreme.  Over the years stories, such as these, handed down by oral tradition elevate our awareness and reverence for animals and their mythological powers.

The Story Behind the Story – With his fishing pole doubling as a divining rod into a timeless doorway, Aaron Plunkett makes an amazing discovery, California's first fossilized, 25 million-year-old, toothed baleen whales – January 19, 2000.

“He has, in fact, found a very important specimen,” Senior Curator of Vertebrate Paleontology, Los Angeles Museum of Natural History.  Published in the Los Angeles Times, 10/27/2000.

“The tooth from the fossilized whale that Plunkett found is different from other teeth of ancient baleen whales from that time period, leading to the possibility that the Lake Casitas whale fossil represents a newly discovered species, genus or Family,” Howell Thomas, Senior Paleontologist Preparator, Los Angeles Museum of Natural History.  Published in the Ventura County Star, 10/28/2000.

It is often possible to trace the evolution of a myth almost as surely as the evolution of a real animal.  There are few imaginary beasts that do not contain some element of zoological truth.  The early encounters of sailors with seals, sea-cows, sharks and whales, explorers’ accounts of equestrian tribes and great apes, and the discovery of fossils all fired the imaginations of storytellers to construct sirens, centaurs, gorgons, Cyclopes, demons, heroes, and dragons. Such earlier encounters, embellished by successions of poets, writers and creditable historians, helped create the menageries of inflated and composite creatures that still capture the human imagination.

Throughout Aaron's life “bones” have a real life thematic continuation.  As a professional multi-ethnic percussionist, Aaron specializes in traditional Irish percussion instruments, the bodhran (Irish drum) and musical rhythm bones.  He composed and played these instruments for the infamous steerage dance scene in the Academy Award winning epic film, Titanic.  The Chumash used idiophones in their music similar to the musical bones played by Pahat, the lead character, in Pahat’s Fishing Adventure.  Aaron’s grandfather, Grandpa Louie, owned and operated limestone rock quarries providing young Aaron with giant stomping grounds for collecting fossils as a source of learning, wonder and discovery.  Louie’s reverence and respect for the great outdoors inspired young Plunkett.  Spending time with Grandpa learning the art of fishing in quarries that were filled with water were the scene of many fossil discoveries and delight filled fishing hours.   Aaron and his father, an orthopedic surgeon or “bone” doctor, and noteworthy tenor saxophonist, are honored for making music together on many albums, but especially on their album, Safari –  #14 on Billboard's Radio and Records National Airplay.

The prehistoric fossilized whale tale continues today in an unlikely location for a pod of whales.  Aaron is the founder of the Ojai Valley Whale Society, a 501 (c) (3) non-profit organization and Paleo-Anthropological Cultural Preservationist Group dedicated to the preservation of whales, past and present, and the cultural wealth of the Ojai Valley.

Past and present entwine to share wondrous events that bring us closer to our source. Magical encounters and scientific discovery merge seamlessly in this adventurous story.

The setting: beside a lake a young native boy plays musical bones, an ancient pastime handed down by elders and ancestors while fishing. When the boy catches a catfish and forms a friendship he discovers a prehistoric whale who tells stories of the mysteries of life, survival, coming-of-age, the great outdoors, and Mother Nature.

AARON PLUNKETT is a multi-ethnic percussionist and composer. He collects and plays exotic instruments from native music masters all over the world and is the recording artist who played traditional Celtic percussion for the infamous steerage dance scene in the Academy Award winning epic film, Titanic. In addition to his extensive recording experience and film work, Aaron was the jazz drummer for Lionel Hampton’s World Tour Band. He is credited with writing, directing, and producing educational music videos, World Beats and Bones From the Beginning; authored, and taught classes implementing his cross-curricular multi-cultural music, math, English, language, science education program, World Beats-Music and Percussion From Around the World. He has studied world music, jazz and classical percussion at the International Music Academy, the California Institute of the Arts, and the University of Southern California. Aaron is authoring his forthcoming children’s book entitled, The Lonely Isle.

KIMBERLY ROEMISCH is a writer, artist, costume designer, dancer and poet. Her work is passionately expressed in a collection of poetry, multi-cultural dance, and painting. She has studied art with masters from around the world, and immersed herself in poetic composition, sharing her artistry with audiences all over the country. Her engaging style warmly invites you into another dimension. In addition, she has mastered the use of color, and specializes in painting flora and fossil replicas from ancient epochs. Kimberly is authoring her forthcoming book in a collection of intimate and touching poems, Oms of Love.