Knocking at the Open Door

My Years with J. Krishnamurti 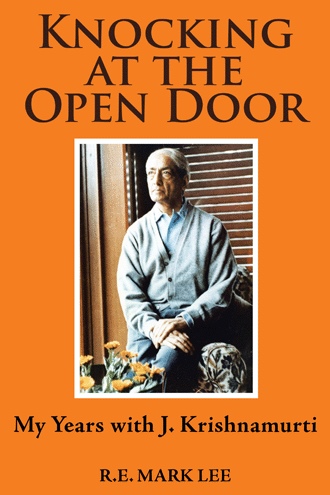 The anchor of tradition appears heavier in the East than it is in the West. One has to think in terms of centuries for real psychological change rather than years. Psychological change seems to manifest at an even slower pace. In Madras, sometime in 1980, during the course of lunch with a few friends, Krishnamurti noted: ‘I’m not talking to them (pointing to an imagined audience in front of him), I am talking to the 10,000 years [of tradition] they bring with them.’ Krishnamurti had said the two audiences that held the greatest hope for the future of humankind were in southern California and in India, but each for quite opposite reasons. The youth in California were unconditioned by daunting tradition. In India, all ages were already predisposed to serious religious mentality, therefore they don’t resist. Change – serious psychological change – was his recurring theme and he stated it and explained it in many different ways in all the cultures he visited. What is it that we are after? What draws people to religious and spiritual matters and to Krishnamurti? In many of his talks, Krishnamurti began with some version of ‘There is a crisis of consciousness of humanity’. What does that mean and do we truly see that crisis? It is suggested all we have to do is simply close our eyes for a moment and the crisis is there; our own consciousness demonstrates the crisis with the ‘monkey mind’ (that jumps from one subject to another) and the lack of discipline in our thinking. It is an emergency situation but we don’t actually see the seriousness of it: the dire immediacy of the threat to each one of us. What we are after, then, is living a life of peace, without conflict; living without being self-centered. That is what people are after: being fully awake and aware. We meditate on higher thoughts, we analyze the minutiae of the experience of others, and we read countless books on religious or spiritual themes. We discuss the teachings of Krishnamurti or the Buddha and the latest enlightened people. All the while, we are the same; we are ourselves only partially awake, and are in conflict and unhappy. We practice yoga, we meditate with a mantra or a word or a higher concept. But we cannot be changed by all this by practicing the opposite of what we are. It is the ‘what is’ of what or who we are that will awaken us. That is, the awareness of ‘what is’. ‘What is’ in itself is of little consequence. It is the awareness of it that is trans-formative, creating a different state of mind. I saw that the awareness was sensory – all the senses are involved. Everything works for this: the environment, the food we eat, our health, and mostly, the state of the mind.

J. Krishnamurti (1895-1986) was thought by many to be a modern-day equivalent of the Buddha. In fact, he was once even considered to be the second coming of Christ. While many think it wonderful to live and work in close proximity with such a person, it’s difficult to understand the depth of what this means and how challenging this might be. In Knocking at the Open Door, author R.E. Mark Lee provides an ordinary person view of what being close-up and working together with such a man means, how it challenges one at every turn, and how it causes one to question ceaselessly, even more deeply than one ordinarily would. Lee offers an insightful, candid, and heartfelt narrative that reveals various unknown facets of the eminent world teacher J. Krishnamurti and highlights his distinctive vision for education worldwide. This comprehensive volume brings alive the practical and everyday interactions Lee had with Krishnamurti during a twenty-year period in India and the United Sates. Knocking at the Open Door shares a clear and honest account that demonstrates the challenges of working with Krishnamurti in running a school that is true to the teaching and yet able to function in the reality of modern parental, student, and educational establishment expectations.

R. E. Mark Lee grew up in Santa Barbara, California, and received a master’s degree in education from the University of California in 1977. Most of his professional career was spent in schools in India and America. He was principal of the Rishi Valley Junior School from 1965 to 1972 and founding director of the Oak Grove School in Ojai, California, from 1975 to 1985. He served as executive director of the Krishnamurti Foundation of America for twenty years and was director of Krishnamurti Publications for five years. He was the chief editor of the seventeen volumes The Collected Works of J. Krishnamurti, The Book of Life, and The Little Book on Living. From 1995 to 2010, Lee was the owner-publisher of Edwin House Publishing, which specialized in memoirs of Krishnamurti’s associates. His interests include architecture, gardening, travel, and reading. For the past forty years, he has lived with his wife and daughters in Ojai.