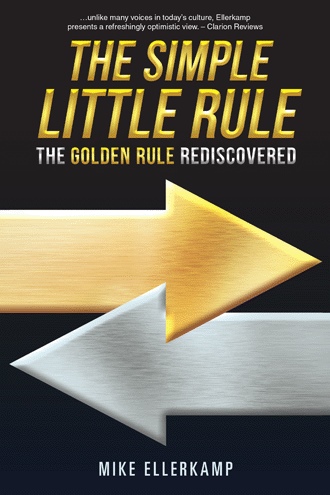 History shows us that the Golden Rule is a very simple, one-sentence statement about compassion, but generation after generation, we manage to distort its execution; hence, there are tens of thousands of words written in every language and culture trying to explain and persuade us to live our lives grounded in this principle. That realization led me on a hunt to create a logical way so I might fulfill this principle in my life and find the harmony promised in scriptures across all religions and cultures. This is the story you are about to read.

Many years ago, I came to a place in my life where my interests for discovering philosophical, spiritual, and religious truths led me to a defining moment. I began to grasp that historically, all over the world and within all cultures and religions; a profound tenet exists that supports a common connection among all peoples. In one phrasing or another, the spiritual principle known as the Golden Rule has been taught for centuries. It is a simple one-sentence phrase that bears repeating.

Do unto others as you would have them do to you.

This awareness percolated inside me for years, yet I put off writing this book due to the rigors of everyday life. I always found something else more important to do or a place I just had to be. In today’s world, where mass murders have become part of the daily news, the insanity and violence of living war can be viewed on the nightly news, and racial and religious tensions appear to be on the rise, it is more important than ever for us to remember and revisit this simple, little rule.

After many years of research and study, I have found a behavioral pattern that repeats itself throughout history and cultures. When we all practice the Golden Rule, we move toward harmony and peacefulness-the light-and when we do not, we move into the darkness of chaos and strife. My goal for all who read this book is that they will find the peaceful motivation that comes out of the daily practice of this simple, little rule. My hope is that you will experience happiness, fulfillment, and prosperity; and be able to create a healthier environment for yourself and a better future for your children. When I was growing up, my family was never into church or religiously oriented; but from an early age, I burned with a thirst for internal peace and harmony, for a deep understanding of the world around me. I hunted on my own and in my own way to fill a perceived void. This is how I began the journey that led me to write this book. In hindsight, the key steps along the way all make sense. As a young man, around 1976, I was introduced to a Bible study group, in which the Bible was taught from the original Greek and Hebrew texts. This method of presenting the texts was appealing and fulfilling for me, and I was truly in love with the Word.

About 1983, after I left the military, the pastor of the church I was attending at the time made a comment after one of our classes that went something like this: "Apartheid was the proper way to handle the matter." I confess that I didn’t really comprehend what he meant at the time, but my spirit knew instantly that there was something fundamentally wrong with that statement, and it troubled me subconsciously. We didn’t have Google then, so weeks passed before I understood that apartheid (an Afrikaans word meaning "the state of being apart" or literally "apart-hood") was a system of legal segregation in South Africa. Although the pastor’s statement reflected his personal point of view, my whole life exploded. A system of existence that was abhorrent to my inner peace in every way confronted me. How could a person of spirit, the pastor of a church who was supposedly steeped in scripture and spirit, say such a thing? Believe such a thing?

I was born and raised in the South. I had experienced segregation and racism firsthand, including from my father, and couldn’t comprehend why one set of people would or could believe they were somehow inherently better than another set of people. This philosophy of superiority has never made sense to me. I had just left the military, where death came to every person, no matter his or her race or religion, just as horribly, just as swiftly, and just the same, no matter what his or her differences were.

The longer I lived with this experience, the more betrayed I felt. Something deep inside me had been injured, or perhaps I was losing my youthful sense of possibility. I left the church, feeling such dissatisfaction that my earlier feelings of being "in love" with the Word moved like the swing of a pendulum directly into hatred toward any form of religion or Bible teachings. I had spent years seeking answers in this Bible study environment and felt betrayed and lied to. I wanted revenge. Needless to say, I was in a very dark place. What happens when your life sours yet you still have that hunger for what is missing, that perceived hole right through the middle of your life?

I began hunting to find answers in my own way, and for nearly thirty-five years now, I have done just that. At first, I admit my goal was to prove the foolishness of religion once and for all. But as I pursued that goal, little truths began to rise and bring me back around. My research has been extensive, if all over the board. Being ex-military, I love military history, but I also found that I have a keen interest in science of all kinds, the study of social development, the rise of common-law systems, and of course philosophy of all kinds. Mythology became important to me.

All over the world and within all cultures and religions, a profound tenet exists that supports a common connection among all peoples. In one phrasing or another, the spiritual principle known as the Golden Rule has been taught for centuries: “Do unto others as you would have them do to you.” In The Simple Little Rule: The Golden Rule Rediscovered, author Mike Ellerkamp shares his spiritual, philosophical, and historical journey as he brings to life once again this simple yet profound rule. Not only showing how the Golden rule became the centerpiece of philosophical teaching throughout the world in a specific historical moment in time, Ellerkamp expands on the Golden Rule with five supporting principles that enhance and enrich our lives as professed through the ages—principles of Wisdom, Justice, Moderation, Courage, and Discipline. In today’s world climate, it is more important now than ever for us to rediscover this simple little rule. And because embracing the Golden Rule can change our present perceptions and motivate us to work to change our own futures, it makes the Golden Rule a simple little rule so powerful it could even change the world.

Mike Ellerkamp is a husband, father, grandfather, and cancer survivor, and in the 1970s he served both in the US Air Force and in the US Army as an Airborne Ranger with the First Battalion, Seventy-Fifth Infantry. His greatest hope with The Simple Little Rule is to reintroduce the power and passion of the wisdom of ancient philosophers and teachers expressing God’s mission statement—to love thy neighbor as thyself! Mike and his wife, Mollie, live today in Houston, Texas, with their two dogs, Corky and Coco Man, and they enjoy traveling and skiing.