Found in Translation - GENESIS ONE 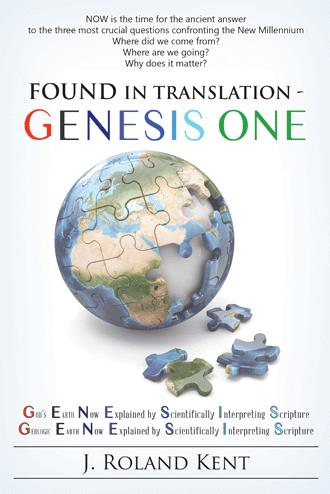 Religious and spiritual followers affirm their beliefs founded on faith while scientists and researchers build their theories from the physical evidence they acquire during their investigations. However, neither religious beliefs nor scientific theories are always correct or ever complete. For millennia, biblical scholars have translated the Scriptures from the original Hebrew text, first into Greek, then Latin, and then English. From those translations, hundreds of religions have been founded, each with their own belief system, based on what church leaders believed those translated words meant. The Merriam-Webster dictionary defines belief as, “a feeling of being sure something exists or that something is true.” In contrast, scientists gather evidence from nature that give rise to scientific theories. They combine their hypotheses and then construct scientific models that change over time as new evidence is introduced. The dictionary defines scientific theory as “a scientifically acceptable principle offered to explain phenomena through testing and evidence.”

This division of thought may be the result of how the human brain is organized with the two hemispheres divided by a groove called the “medial longitudinal fissure.” Some psychologists propose each hemisphere is specialized, what they call “left-brain, right-brain dominance.” They suggest the function of the right hemisphere is expressive, imaginative and emotive in nature; while the left hemisphere is adept at tasks involving logic, analytical thinking, language, numbers, and reasoning. Everyone has each of these qualities to some degree or another, but genes determine how an individual will interact socially—outgoing and expressive, or reserved and controlled. Whether or not this theory is entirely correct is a matter of debate, but we all know people who are more extroverted, flamboyant, and emotional, and others who are more introverted, cerebral and aloof. It could be said that analytical and scientific thinkers view the world with the slogan, “I’ll believe it when I see it” (evidence). And at the same time, people who are more emotional and spiritual in nature might have the opposite slogan, “I’ll see it when I believe it” (belief). These slogans could also apply to science (analytical/evidence) and religion (emotional/belief), and therein exists the dichotomy between the worldview that these two groups represent.

One of the primary aims of both religion and science is to offer an explanation for the origin of everything, especially the beginning of time and space and where we came from. Religious followers have a simple answer; they believe God created everything in the beginning. In contrast, scientists have advanced many elaborate theories to explain our origins. However, beliefs, faith, principles, and theories do not provide concrete answers—they are not complete. As such, both sides of the religion/science divide have failed to give us a coherent explanation of our origins, which has resulted in contradictory messages, which have thus created divisive opposition between many groups of people.

Many creationists believe God created the universe, the earth, the plants, the animals and humans 6,000 years ago, in six twenty-four-hour days. However, this belief denies the realities and the physical laws of nature. Since they believe God created everything, then they must admit that He also created nature’s laws. The fact is, the universe and everything in it conforms to these laws and to the physical constants (i.e. E=mc²). Physicists have gathered an abundance of evidence by exploring the cosmos with large, powerful telescopes, and by viewing the nanoscopic quantum world with electron microscopes and powerful atom smashers. Geologists have found compelling evidence by uncovering geologic samples recorded in rock strata, and from prehistoric fossil finds. These methods all provide confirmation that earth’s geological and evolutionary history have occurred very slowly, over billions of years—not six days.

Physicists theorize the universe began from a single particle smaller than an atom and then expanded into everything that now exists. This theory, known as the “Big Bang” is how they explain the universe after the first microsecond of its existence. However, they cannot explain the origin of this particle, what caused it to happen, or what existed before it. The known physical laws of nature do not allow for it to have originated from nothing.

In 1859, Charles Darwin proposed the theory of evolution known as “Darwinism.” This idea is an explanation of how life naturally evolved from one initial microorganism into the countless variety of plant and animal species both living and extinct. However, the theory does not explain how life could have originated from nonliving, inorganic, inert elements. Biologists can explain what living organisms do: grow, move, sense, reproduce and heal. However, they do not know what the life energy is that animates them to do these things. Darwinism does not explain how or why the very first animal originated, and disappointingly for evolutionists, there are major gaps in the fossil record for the anticipated transitional animals that led from the very first microorganism in the ocean to all of the animal species, both living as well as extinct.

J.R. Kent has solved a 2,500-year-old mystery that defies both religion and science! Hidden in the thirty-one verses of Genesis One is a message so powerful it could ultimately change the course of global events. Our hi-tech world is barely a century old, and already life altering environmental, terrorist, political, economic, and health threats pose potentially dire consequences for our future. However, many of the ancient, advanced civilizations such as the Egyptians, the Greeks, the Romans and the Mayans of Central America endured for thousands of years. So what was their secret, and how is it revealed in the Genesis verses? Genesis One is an ancient creation account for the earth, plants, animals, and humankind. However, when reading these verses they may seem bewildering and out of the natural order. The premise of this book illustrates in startling detail that this amazing story—in fact—perfectly correlates with the theories of modern science! There are several reasons why this mystery has not been revealed until now. First, an ancient author wrote this account in the original Hebrew language, but the actual evolutionary sequence of the Earth that he so accurately revealed has been lost in translation by the many biblical versions that followed. Second, the discoveries of modern science now put us at a point in time when this correlation has now been found in translation. This revelation then begs two questions. How was this knowledge possible in ancient times, and who wrote it?

J. Roland Kent is a graduate engineer with a major in science and worked for a large Midwestern R&D engineering company. He and his wife now travel extensively, seeking answers and photographing nature’s mysteries. His curiosity of the natural world and his love of breaking hidden codes made writing Found in Translation the ideal subject.