Exploring the causes and cures of foot pain with Structural Reflexology® 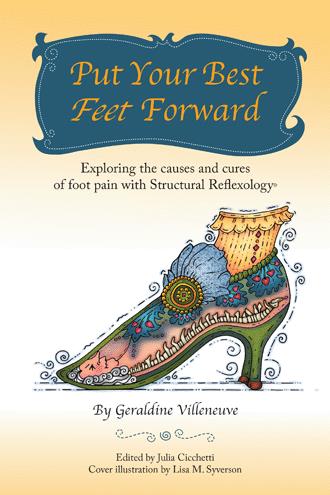 Chapter 4 Reginald’s Brain Reflexes According to Dr. Wikler, only 5% of foot deformities exhibit pain. As mentioned previously, Dr. Wikler spoke of the probability of developing degenerative issues by wearing incorrectly sized shoes. (1953) This information pierced my heart when a client was referred to me for Reflexology by his psychiatrist for stress-relief, and she disclosed to me that he had suicidal tendencies. As with all my sessions, I approached this one with an open mind and heart. When Reginald (his name has been changed here for the purposes of confidentiality) by far one of my favorite people, entered my office he divulged he had thought of jumping off a bridge on his way to his appointment with me, and that most of the time he stays home because of these dreadful inclinations. I expressed my sincere appreciation that he came in to receive Reflexology from me. He had no complaints of foot pain, but I noticed his toes were curled under, and the tips and middle joint of each of his toes were callused. I made a mental note that the toes represent reflex areas for the brain and head. As with every new client I then proceeded to measure his feet. He told me he wore a size 11 shoe, but after measuring each foot we were both astounded to find his feet measured size 14! The possibility that his symptoms of suicidal ideation developed from wearing shoes that were too small startled me. His toes were crunched and curled into shoes that were three sizes too small. With further assessment, Reginald’s feet were stiff and showing very little articulation, almost as if each foot were one solid bone. Working with Reginald that day was like releasing fireworks at the fair, and after this session, with an uplifted tone he said he felt wonderful and was going on a shopping mission to purchase bigger shoes. (We decided that a 12-shoe size would be a good start.) He received two Reflexology sessions a week, and by the end of one month, Reginald stated he was feeling less suicidal and decided to venture out of his condo and take a dance class. We decided it was time to increase his shoe size to 13. His toes were uncurling daily as his joints began to articulate and find their function again. (A process that can be somewhat uncomfortable for a short time.) As his toes unfurled, I witnessed Reginald emerging from the chains that bound his physical prosperity as he continued with his dance class and became more and more social. During one of his sessions he surprised me by saying he decided to open up a latte stand at a popular film festival. Eventually his Reflexology appointments lessened to once every three weeks, then once a month, and by the end of four months Reginald fit his now-straightened toes comfortably into his size 14 shoe and was as social as ever. Reginald was involved in other modalities of therapy as well as Reflexology, but I could clearly link the small shoes he wore as a contributor to this destructive behavior. In weight-bearing motion the natural articulation of the toes allows the head and neck to move freely with the flow of movement of the cervical spine where the cranial nerves are housed. In my opinion Reginald’s brain reflexes (his toes) were being under-stimulated because his toes were not able to move in his size 11 shoes. This caused an extreme handicap in mobility when he walked or moved, leaving the heavy head and neck vulnerable, hence the need to compensate. In motion, without the strength of the toes to rely on, the head and neck will retreat back into the shoulders, similar to what a turtle does to get back into his shell. The muscular tension created by this compensation can very likely diminish nerve and blood supply to the head and brain and can very well account for his depression. As far as local implications, the foot suffers greatly, and the 38 foot joints that articulate and balance the body become challenged, though often do not exhibit pain, and this is why the feet are not usually taken into account as the cause of degenerative issues in the body. Eighteen years later I contacted Reginald. He spoke of some of the many accomplishments he has achieved including training in Reflexology, Acupuncture, and Zero Balancing. Recently he has walked and bicycled the 500-mile Camino de Santiago, and is now comfortably wearing size 15 boots!

Foot pain is something with which most Americans suffer, and yet most ignore or have simply surrendered to it. In Put Your Best Feet Forward, experienced Structural Reflexologist Geraldine Villeneuve outlines not just the types of foot pain and their sources, but also how this pain can manifest itself throughout the body. From depression, to lower back pain, to common foot problems themselves, freeing our feet from the shoes that bind them can be the answer for which we’re searching. Villeneuve educates readers on the importance of foot health for that of the body and mind and empowers them to take their health and vitality into their own hands. Put Your Best Feet Forward is for anyone interested in improving health, youth, and vigor. Readers will find themselves saying “Ahhh…” in relief!

Geraldine Villeneuve has been practicing Reflexology for over 30 years. She holds a Bachelor of Science in Therapeutic Recreation, is a Licensed Massage Practitioner specializing in injury remediation, and is an American Board Certified Reflexologist. She is also a member of the International Council of Reflexologists. She founded the Seattle Reflexology and Massage Center where she produced and taught a popular Mastery Level Reflexology Certification training series from 1992 - 1999. Geraldine trademarked Structural Reflexology® in 2013 as a revolutionary motion to promote foot health awareness by providing education for more healthful and therapeutic options to resolve foot pain and compensation in the body. Ultimately her goal is to encourage public awareness to rise into a culture of individuals with vital feet rather than a culture of foot-pain sufferers. Her experience, clarity, and dynamic teaching style invoke great respect and admiration in the health forums she leads on the subject of Structural Reflexology®. Since her busy practice comes mostly from word of mouth she appreciates referrals and collaborating with a variety of health care professionals including chiropractors, MDs, NDs, and others who see great value in Structural Reflexology® because they have either witnessed recovery from their patients’ foot pain or have personally experienced successful and lasting relief from their own. Geraldine now happily resides in Essex, Vermont with her husband Neil. She enjoys spending time with family and friends, playing the violin, stained-glass window-making, skiing, rock collecting, nature, and learning new things.