Igniting Your Potential through the Power of the Violet Flame Chakra 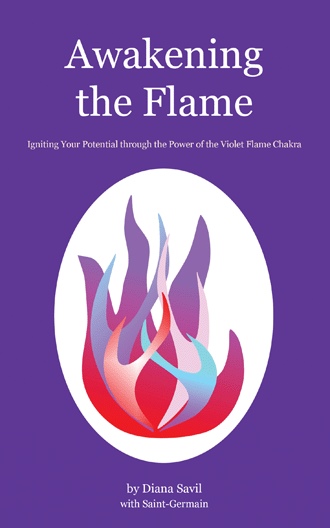 Although the Violet Flame Chakra is located between the chakras of the brow and crown, here the similarity ends. It is a different creature altogether.

“The Violet Flame Chakra sits atop the brow, on the highest point of the forehead, and burns with all the colours of the violet light, from deep magenta to pale lilac through violet and purple, with flickers of silver, gold, deep ruby red and opalescent light. It is a living flame and should be seen as such - rather than as a star or orb or vortex of light. It serves to connect us to every manifestation of the Violet Flame found in every dimension that exists between the Divine and ourselves.

This energy, that of the Violet Flame manifesting within us as a Chakra, is powerful indeed, and those of us who have been working with it for some time are continually discovering just how powerful it is.

The first experiences of Awakening the Violet Flame Chakra came during workshops facilitated by Edwin Courtenay in the Autumn of 2013. Edwin is a Channel of many years’ experience, and has been working with The Ascended Master Saint-Germain for some time.

I was privileged to attend the second of these workshops, in Surrey at the end of November. The original intention had been a workshop for 50 people, but it soon became clear that more people were drawn to this work. A larger venue was found, and on the day 84 people were present to receive their Awakening. It was a magical occasion.

Towards the end of the workshop Edwin Channelled Saint-Germain, and we were told that during the day the Violet Flame Chakra of the Earth had also been Awakened. This is located at Leith Hill, near Dorking, in Surrey, not too far from where we were.

Saint-Germain also told us that the energy of this Earth Chakra would build slowly over the coming months. He asked us to regularly direct energy through our own Violet Flame Chakras towards Leith Hill, to support this process. He said that in time the Chakra would become known internationally as a Sacred Site, and would receive visitors from throughout the globe.

As part of the process of the day, we drew names of the Higher Beings associated with the Violet Flame Chakra. As a Channel for Saint-Germain myself, I was not surprised that the name I drew was: Saint-Germain.

Edwin explained what role we might expect to play within the work of the Violet Flame Chakra, according to the name of the Being we had chosen (or who had chosen us!). To those who had drawn the name of Saint-Germain, he said that we would be involved with spreading this work, sharing information, and taking it forward.

This I have been privileged to do.

My first exploration of the energy of the Violet Flame Chakra came the following day, when I “tried out” some of the healing tools on my Partner, Simon. He is also a powerful healer, therapist and Channel, and as such, both sensitive to higher energies, and a judge of their power.

The tools that I was using were the four “Rescue Flames” that we had been introduced to at the workshop, following the Awakening of our Violet Flame Chakra. These are aspects of the Violet Flame energy which work on specific levels within the recipient. They are for use in times of crisis, hence their name “Rescue” Flames.

As I had practised the previous day, I made the preparation, and directed the Flames, one at a time, towards Simon.

Both he and I could feel the powerful energy of each Flame. They were strong indeed.

Awakening the Flame charts the journey of the Violet Flame Chakra—a new energy centre within our Being introduced in November 2013. The Awakening of this Chakra enables multidimensional healing abilities and profound personal transformation. As the first wave of those who received the Awakening began to work with this new energy, it continued to evolve. Awakening the Flame tells the story of its development and evolution.

The Violet Flame Chakra is closely associated with the Ascended Master Saint-Germain. In Awakening the Flame, he shares his personal journey with the Violet Flame through the ages. Channelled directly from him, this powerful story is told in his own words.

The Violet Flame Chakra plays a vital role in the evolution of Humanity as we move towards our Ascension. Including both practical information and Channelled inspiration, Awakening the Flame is a powerful tool for spiritual development.

“Diana Savil is a pioneer in bringing forward the next evolutionary step of the Violet Flame and its chakra for humanity. This book is a must read for anyone serious about true spiritual transformation and service. The simple-to-use secrets and mysteries that it contains may very well change your life! I cannot recommend it enough! Let the transformation begin!”

Diana Savil is a Channel and inspirational teacher. Working with the energy of Ascended Master Saint-Germain, she offers Awakenings of the Violet Flame Chakra and other associated workshops, courses, and groups. Diana lives with her Partner in East Sussex, UK.