The Revolution of Marie

How a Past Life Informs the Present

by Noel A. Brand 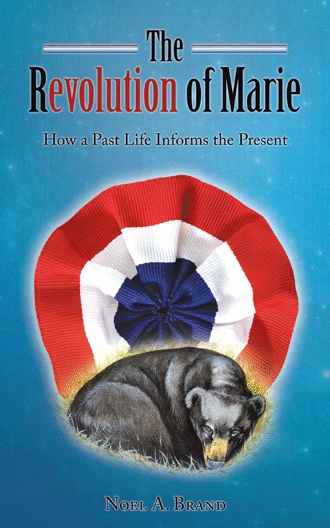 Reincarnation. Some believe in it, some don’t. Some don’t care or are not interested in pursuing it. I am a believer and in this book you just might find something of interest for you, perhaps your past life. I will also tell you Marie’s story. This book is about connecting with past lives, to make sense of the present. I first met Marie Le Claire in July 2013. A spirited young French woman, Marie was lean and tall in stature with long, flowing brown hair. She told me over several interviews about her life in France. Marie was a viticulturist who was born in the southern French commune of Beaucaire. She told me of her life’s fears and joys and of the three men named Louis who shaped her destiny. She also told me of her death. You see, Marie was a young woman who lived in eighteenth-century France and just happens to be a past-life persona of my present-day wife, Diane. It is said that when you die, your entire life passes before you—not in summary but in details that review every moment. Death’s angel then asks you one question: “Do you accept the person you are at the end of your life?” I can only speak for myself, but now, standing on the doorstep of death, I can look back with fond memories at the adventures of my life as Marie Francesca Le Claire. So which adventure do I begin with? I think January 12, 1789. I was in Beaucaire, France, and I was eighteen years of age. It was the moment I first took control of my life and made the choice to change it. It had been a cold winter, and although recent years had been favourable to the grapevines, a lack of rain last season meant they required some extra care in preparation for the coming spring. I strolled along the laneway that stretched between our compound and the road. The January air was so cold, it took little bites at my skin, the wind stinging the end of my nose. My breath added to the mist hovering over the vines like a feathery blanket. It only made me feel more invigorated as I admired the rows of vines running like rays of sunshine, straight out to the distant banks of the Rhone River. It was a view I never tired of, so I took little notice of the mounted rider approaching from the road. There were so many travelling down our lane these days, so many soldiers travelling to and from our province. You see, France in 1789 was a country of citizens unhappy with their lot and with their king. Soldiers were increasingly patrolling the countryside, looking to quell any civil unrest, and our farm was a regular rest stop on their patrols. We fed them, provided a bed for the night, and stabled their horses. My attention this day, as it was most days, was on the vines. Some posts would have to be replaced and furrows cleared before the coming spring rains. I was surprised when a horse stopped behind me. The rider was shouting something, but my mind was deep in thought, organising the day in my head. Again the rider shouted, more of a grunt than a shout. The sound was familiar but not in a good way, not like hearing my dear papa calling. No, it was an ominous noise, and it sent a chill up my back, raising the hairs on my neck. A thought circled my head like a hawk homing in on its prey. I began to sweat, even as the cold wind lashed my body, and I thought, My God, the brute has returned. I had worked hard to repress the memory, the pain and anguish of the last six years. My happy family, our lives torn apart with the coming of the soldiers.

Author Noel A. Brand first met Marie Le Claire, a spirited young Frenchwoman, in July of 2013. Over the course of several interviews with Brand, she shared stories of her life—and of her death in the eighteenth century. Marie is, in fact, a past-life persona of Brand’s present-day wife, Diane.

In this biographical study, Brand recalls how he came to discover this relationship and what that discovery meant for Diane. He first explores his own background and considers the process of accessing past lives, as well as how past lives may influence people’s present existence. He then shares Marie’s life story, an engaging tale that is surprisingly relevant to the struggles of women today. Finally, he discusses the connection between Marie and Diane, providing practical exercises for the reader to use in their own past-life discovery.

This personal narrative presents an exploration of past lives through the stories of a young woman from eighteenth-century France and the modern-day Australian to whom she is connected.

NOEL A. BRAND is a deep-trance medium, a Reiki healer, and a past-life retrocognitive. His life and work centre around his home in Victoria, Australia. He is a regular speaker and demonstrator at a spiritual church. Visit him online at www.jackandboy.com.