Loving in the Grown Zone

A No-Nonsense Guide to Making Healthy Decisions in the Quest for Loving, Romantic Relationships of Honor, Esteem, and Respect 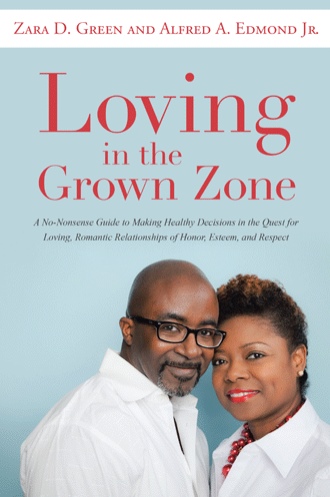 BEYOND ADULT: MAKING BETTER DECISIONS
Sharon, a single, financially independent, educated professional woman, meets the charming, funny and gorgeous Devin while out on the town with her girlfriends at the club. The chemistry is intoxicating; they almost immediately begin an intense sexual affair. In a matter of weeks, Sharon falls deeply in love with “her man," dreams of spending her life with him, and becomes pregnant—all before discovering that Devin is married with three children and at least one other mistress. After a period of anger and devastation, she resigns herself to single motherhood and life without him. Late one night, Devin shows up at her door, full of apologies, declarations of love and promises to “make it up” to her. Sharon lets him in and resumes their affair. Two years and an additional pregnancy later, her only communication with Devin is her ongoing battle to collect child support.
Joshua, a hard-working, responsible, blue-collar professional, meets Samantha, an attractive, God-fearing woman, in church. They become friendly over weekly Bible study, and eventually start dating, while remaining celibate out of respect for their shared Christian beliefs. As a demonstration of his love, Joshua gamely tries to satisfy Samantha’s appetite for four-star restaurants, designer shoes, and expensive jewelry—even taking on overtime at work when he can. When Samantha has a crisis—such as the impending repossession of her car—she counts on the reliable, devoted Joshua to bail her out. After six months of dating Samantha exclusively, his savings exhausted and credit maxed out, Joshua is laid off from his job. He notices that Samantha seems more distant, though when asked, she insists nothing has changed. A month later, she ends the relationship. God has led her to the man He has chosen for her (Roberto, a member of their church’s ministerial staff who owns a successful real estate business). Samantha has agreed to marry him.
These scenarios are all-too familiar to most people (if you don’t know these people, you’ve likely been in the shoes of at least one of them). What they have in common is that they are comprised of adult choices that everyone involved had every right to make. More importantly, they graphically illustrate that there is a world of difference between an adult choice and a Grown decision. Consistently making better decisions requires far more than merely achieving adulthood and declaring, "I'm grown!"
Teaching the difference between adult choices—what we have the right to do—and Grown decisions—that which is in our best interest to do—is the mission of the Grown Zone, the multimedia initiative that we launched through our company, A2Z Personal Growth Enterprises, in November of 2012. Today, the Grown Zone can be found on a number of social media platforms, including Twitter, Facebook, Google+ and Instagram. The Grown Zone Show on BlogTalkRadio (BlogTalkRadio.com/GrownZone/) has gained a loyal listenership for weekly live broadcasts at 12 noon EST each Saturday, as well as a podcast available via iTunes and apps for Android devices. And we’ve experienced growing demand for our live Grown Zone events, including our first Grown Zone Self Love and Healthy Relationships Retreat at Chicago’s Welcome Inn Manor in November 2013. That event also resulted in a weekly Grown Zone relationships blog for the Love channel of JetMag.com. This book is largely comprised of posts to that blog, in addition to posts from our blog at GrownZone.com and other Grown Zone branded content.
As you read this book, you’ll quickly learn some of the key principles (including several of those which were violated by Sharon, Devin, Joshua and Samantha in our examples above) of moving beyond adult choices to healthy, grown decision-making. Our goal is to take on some of the poor decision-making, misguided advice, unproductive beliefs, and yes, ratchet behavior, that seems increasingly accepted and even celebrated in popular culture, despite the human destruction (physical, emotional, psychological, spiritual and even financial) left in its wake. We also aim to make you less fuquitable (pronounced foo-QUIT-a-bul), meaning less vulnerable to deception and manipulation in relationships.
Living in the Grown Zone is about recognizing that adulthood is not the final stage of personal growth, and that your past is merely the floor—not the ceiling—on the potential of your life. We will also argue for you committing to what’s in your own best interest, even if that requires you to question and reject much of what you’ve learned from your parents, your culture, your peers, and even the religious traditions you were raised to believe. We will explore everything from failed relationships and fatherless children to family dysfunction and self-destructive financial habits, offering solutions based on the Grown Zone agenda of More Self Love, Better Decisions and Healthier Relationships—the last of which we define as relationships of H.E.R.: honor, esteem and respect.

Too many people have surrendered to the belief that dissatisfaction, neglect, infidelity, abuse, disrespect, conflict, exploitation and betrayal are natural, normal, and unavoidable characteristics of romantic relationships and even marriage. We are presented with a choice: relationships that don’t last and relationships that do, as long as participants are willing to endure inevitable suffering, mistreatment, and victimization, usually at the hands of one another.

Loving in the Grown Zone is a rejection of that thinking. It is testament to the authors’ belief that while there may be no such thing as a perfect relationship, that is not justification for accepting anything less than healthy relationships. No one is required to accept mistreatment as the price of a loving, safe, and sustainable relationship of honor, esteem, and respect. Furthermore, establishing such healthy, resilient, and fulfilling relationships are not a matter of luck or chance, but of intention, learnable skills and practices, and commitment to personal growth. Loving in the Grown Zone urges you to learn those skills and commit to those practices, including recognizing the difference between the attractors that motivate us to initiate romantic relationships and the sustainers required to ensure that such relationships are healthy, safe, and affirming for both partners.

Zara D. Green and Alfred A. Edmond Jr. are co-principals of A2Z Personal Growth Enterprises, producer of The Grown Zone discussion series. The couple leads sessions on personal growth, self-love and resiliency, healthy relationships, and “Grown” decision-making via webinars and live events across the country.