CAUGHT IN A STORM

MY JOURNEY OF HOPE 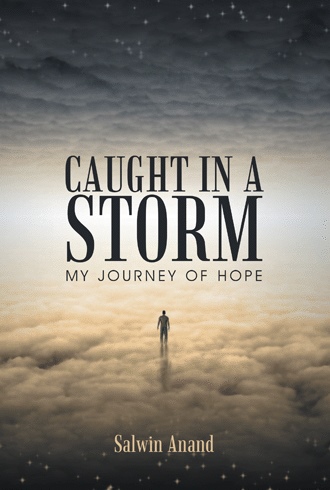 I will never forget the night of March 2nd 2012 where it all began for me, the night that changed my life. I felt that something frightening was approaching, my body had suddenly gained an overwhelming feeling as fear and anxiety had set within me. I had gasped for air as dark as it was, when the water was lapping over my feet, giving me the chills. I had stood still on a beach, observing the commotion I was amidst. My heart starts its will to survive and the fear was slowly ceasing.
Without realizing, my soul had departed my body awaiting before my lifeless self as I became a part of the universe around me. I began to discover what I became, moving about. I could feel the angry waves smashing, enraged and telling me to get out. Bolts of thunder, lightning racing towards the ocean, breaking up and sparking like bursts of flame. The sky exhaled anger, unleashing its storm. The heavens roar as lightning strikes once again. I began to travel, perhaps faster than the speed of light. Looking up towards the sky, my world had turned upside down. I was now caught in a storm.

One night, a dream changed my life and that is when my journey of hope began. I was caught in a storm and faced situations of hardship, I was trapped in a dream that suddenly became my reality. To overcome this, I believed that miracles do happen and dreams have hidden messages.
Caught in a storm, my journey of hope, is based on my true story that changed the lives of everyone in my family. Through this journey I have gotten through the toughest of moments. I have written this book for people to see through my eyes; the hope, the inspiration, the moments of truth, and the life-changing and challenging experiences that one can face. I hope that when you read this book, you will appreciate and be inspired to love, enjoy peace, and foster hope. God bless you all.

Salwin Anand a first-time author, a family man, married with two kids, whose personal journey pushed him to write his first book to share with the world. The journey of hope has just begun.