Finding the Joy in Caregiving 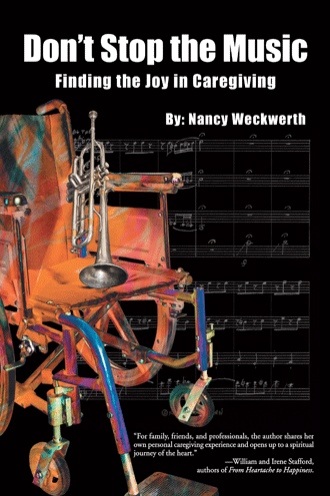 The Phone Call hit me with a terror I had never felt before. My life-partner was being rushed to the nearest ER. He had been at a rehearsal with a small group of jazz musicians and collapsed. They were working out the tunes for a new album. I truly don’t even remember who called. It was February 12, 1991, two days before Valentine’s Day. The Phone Call told me it might be a stroke.

All I recall is a numbness settling on my brain like a dark gray fog. Clarity went out the door for a walk – a walk that lasted for many years.

Up until that moment, my life is that of a professional musician. John and I live in Alhambra, California – a suburb about ten miles east of downtown Los Angeles. He is in demand as a trumpet player. I play (French) horn and piano. We are both composers. We have been publishing the music we write for about eight years now through our own company, Trombacor Music. We also compose whatever music is required for the next gig in the date book. For me, each day consists of a minimum of three hours of practicing my horn, some time writing music, performing, teaching, or working at the local music store. I am happy in the certainty that this is and will be my life.

When The Phone Call came, I was at my part-time job at the music store. Since John had the car, I borrowed a car from a friend and left work to drive to the hospital, thirty-five miles away.

As I drove, my thoughts were spinning. I remember thinking at one point, this is the end. This phase of our life is over. I sensed it more than knew it. In one extremely brief moment, I was sorry we had not had a child to carry his incredible talent genes to another generation. I tossed out that thought with the bath water quicker than it had appeared. It never returned and I am more than grateful for that now.

During the drive, financial panic set in until I remembered that John now had health insurance. It was a mere ninety days since he had gotten it from my employers. I was immediately grateful and relieved.

The next panicked thought was sticking me like a voo-doo pin. How will I pay the rent in sixteen days if John’s income from gigs is gone? What about the child support payments for his son living very far away? Food, gas, phone bills, car insurance? A million pins were sticking me. I was quivering and trying to drive.

I do not remember the drive, only the voo-doo pins. And the dark gray fog.

Looking back on that drive now, it is interesting that I was not thinking about John’s condition. Since I knew nothing more than it “might be a stroke”, and I knew nothing about strokes, I did not have enough information to think about that. All of the other emotions and thoughts about security are the ones that leapt into my head. Suddenly I was out of control of my thoughts. I needed to control the car.

The human brain spins its own web of emotions that are out of our control.

In an emergency, the human brain retreats to its most basic of emotions: the memes of one’s culture, the need for security.

There is no shame in what you feel. Knowing that whatever you feel at that moment is what is right for you, will free you to deal with what needs your immediate attention.

I really dislike parking lots. My preference is to park away from other cars to avoid dings in my doors. Then I usually forget to notice where I park the car relative to where I’m going. It is still February 12. The dark gray fog is hanging over my head like Joe Btfsplk’s Cloud. I must remember where I have parked the car, the one I‘ve borrowed from a friend.

John is in this very scary place: a hospital emergency room. Running on instinct, I feel myself moving into “support” mode. I must be cheerful and helpful. I must disguise my fear for John’s sake.

Ah, that’s what this cloud is, it’s Fear.

So it is Fear that is creeping in and settling in my psyche. I’m cold. Fear is cold. It’s cold in this emergency room. Why are hospitals always so cold? Isn’t there enough to be uncomfortable with and afraid of without adding bone-chilling cold to the equation? I’m not amused by my own half-hearted attempt at humor.

When I find John he is relieved to see me. He is on a bed in a room. My focus is on him like a spotlight on a performing stage. Everything else is swallowed up in the blackness that exists outside of the spotlight. People in scrubs meander into the light every now and then and interrupt our conversation. We chatted, I guess. I have no recollection of what we said to one another. Little did I know that these were the last real conversations I would ever have with him.

While I’m standing in the spotlight beside his bed, John suddenly takes his left hand and lifts up his right hand and arm. While saying “look!” he releases the right arm and it falls sickeningly to the bed. Neither of us knew what that meant at the time. It is probably a good thing we did not know because Fear would have caused me to faint.

He was having another stroke. This second event paralyzed his right arm immediately. His right leg was gone, too, but we did not know it yet.

I vaguely remember being in an adjoining hallway with some cabinets and a phone on the counter. All of a sudden it rings and The Scrubs pick it up. They tell me it’s The Phone Call and they can now treat John. Relief spreads through me in little waves. I want to believe it is big waves but I do not dare risk letting go of the dark Fear I’m clutching in my soul. I discover John has been whisked away from my spotlight. My thinking is so unlike my normal self. The Cloud-Fog is back in force because the spotlight is gone. Everything is so empty.

Later, in another more private room, not the emergency room, The Scrubs tell me they are trying to stabilize John and keep his heart and blood pressure normalized. He is on a monitor that sets off an annoying alarm every time he is in danger. We now know it is definitely a stroke or Cerebral Vascular Accident. He has had two.

I opt to sleep in a chair next to his bed overnight. His heart monitor alarm goes off and wakes me every hour or so. The Fear Cloud is becoming thicker. I run down to the nurse’s station repeatedly to tell them the alarm is going off. The Scrubs there give me the distinct impression that they cannot be bothered with coming to John’s room yet again to turn off the poisonous noise spewing from the machines connected to John.

This continues for more hours than I can track in my sleepless haze. There are far too many “whys” stomping through my brain leaving sucking noises in the muck.

Morning looms, I think, in this windowless room on February 13. It must be morning because there is the noise in the hallways of more activity. John awakens for a moment every now and then. I do not know if he knows where he is, or who I am.

At one point, The Scrubs enter and tell me I may as well go home and get some real sleep. Apparently John will sleep for many more hours and there is nothing I can do. I will need my rest.

I must have found the car and driven home, but I do not remember any of it. Only the Fear Cloud that follows me home.

“Nancy Weckwerth has written a powerful book that guides the reader through the practical issues that arise when we face life’s sudden changes. At the same time, she supplies a deeply inspirational and authentically emotional look at living with celebration amidst the transient nature of existence. The reader is left with a clear feeling that, with love and willingness, everything and anything can be integrated into a well-lived, well-loved life.”


“Don’t Stop the Music is a narrative of John’s acceptance of his disability and Nancy’s transformation to a caregiver. Nancy shares their journey through every triumph and challenge with honesty and openness. Her insights disclose the light, the lessons, and the laments that guided them across uncharted territory from surviving to thriving.”


Author Nancy Weckwerth has created a “survive and thrive” manual for Caregivers. Based upon over twenty-five years of caregiving for her friend and partner, John D. Swan, the book describes how to find the joy in caregiving. The wisdom within is meaningful for any caregiving situation

Nancy Weckwerth holds the Master of Music degree in Performance, the Bachelor of Music degree in Music Education, and the Certificate in Composition for the Music Industry. She has over 25 published musical compositions and arrangements. In addition, she has 3 prose articles published in professional music Journals.

She currently works as a REALTOR® in Southern California.