Unlocking the Mystery of Life after Death 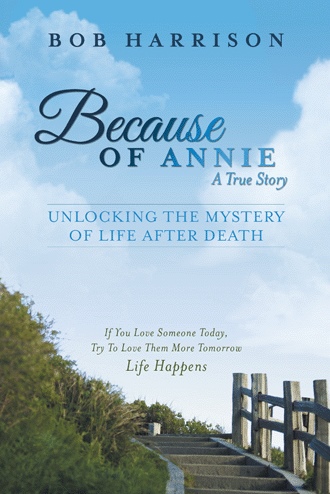 Bob Harrison was an ordinary guy who served twenty-four years in the US Air Force with his wife, Annie, by his side. When Bob retired from the armed forces, he and Annie decided to settle down and try to find the American dream in Wichita, Kansas. Things went well for a few years, and their two small antique businesses thrived. Then, on a warm summer day a stranger came out of nowhere, knocked on their door, and immediately transformed their lives into a clash of two worlds. The stranger’s name was blood cancer, full of chaos, evil, and the inhumane—versus love, compassion, hope, and faith. Through Bob, from his eyes as a loving caregiver, you’ll see the trauma, feel the pain, hear the laughter, and share in the love of two people that fought until the end. This is not an ordinary trail on a walk through cancer. It’s a chronological journey from the beginning to the end, with an unlikely twist. Bob’s hope and dream is that someone will learn from his experience and not have to relive this story. After all, it’s Annie’s story—Because of Annie.

Author Bob Harrison was raised on the Northern California coast, attended college for 2 years, then joined the United States Air Force where he served his country for 24 years, of which 17 were in Europe engaging in the Cold War. Bob married Annie, his wife of 37 years, during his 4th year of service.