...That is the Question 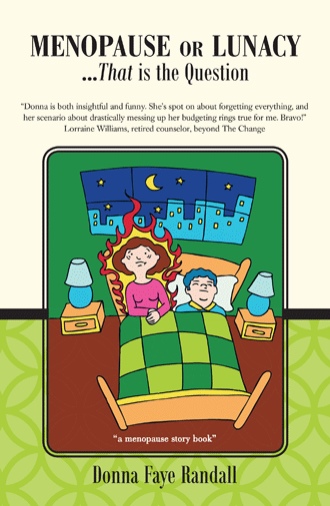 The Chairs are NOT the Issue

Riding the bus, at work, in the grocery store, on the beach, in the fitness club, at the coffee shop, walking, cycling—you see them everywhere. Often, they are rushing, looking frazzled, knowing they’ve forgotten something important, for which they will pay later. Quite likely, they are wearing lightweight clothing and stopping often to wipe their furrowed brows. These are women-of-a-certain-age, and they number close to 50 million in Canada and the United States alone.

Reading Menopause or Lunacy … That Is the Question will help you:

identify, reasonably well, menopausal women—and be kind
fess up about your menopausal status—and still like yourself
seek help from health practitioners—to ease your symptoms
laugh often and laugh loudly with, not at, menopausal women

Offered up in short scenarios for easy consumption, Menopause or Lunacy … That Is the Question is perfect for bedroom, bathroom, travel, and commuter reading, etc.

Donna Randall is an experienced sexuality educator and a woman-of-a-certain-age who has survived her menopausal mania, with her sense of humor intact. Her willingness to share personal stories draws women to open up about their own journeys through The Change, often a freeing experience for all concerned. Hailing from Cambridge, Ontario, Canada, Donna relocated to Victoria, British Columbia, Canada and thereabouts, where she continues to live, love, and laugh on and by the sea.